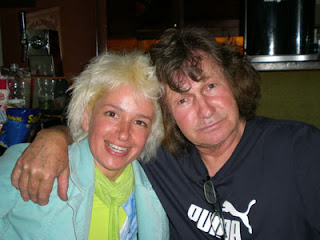 Song Contest Party in the mansion of Peter Müller (picture), one of Austrias most successful producers. We were about ten people, among them Elisabeth Engstler (TV-host), Michael (Mosaro) Scheikl, Jack Fronczek and René Reitz - also well-known music-producers. Anyway, we had a lot of fun voting and guessing who would make it to the top. Only one of us made the right guess (not me). I voted for Greece or Serbia, but also enjoyed the songs of Iceland, Denmark and Ireland.
So, afterwards we were discussing about the German victory. Some said, Germany only won because of political reasons. Everybody's hoping for Germany's and the EU's financial aid. So, frankly speaking, I fully agree with this point of view. Though the performance of Lena was quiet unique and extroverted, the song had no appealing melody and there were undoubtedly better singers on stage.
Over the years the song contest has gradually lost its original cause, to represent songs and artists from other countries in order to learn something about their musical culture. Now it turned out to be a political and economical event. To me it's a sad thing watching how things are changing to the worse. Though I think that the English language should be spoken by everyone on this planet, I'd prefer songs to be sung in the original language of the participants. No country should lose its musical roots!
Posted by Sonja at 5:25 AM No comments:

I HATE MY VIDEO SOFTWARE!!!!

Everything looked so good. I really thought I've overcome all my computer problems, but now they are here again. I'm talking of the video program Studio 14 from Pinnacle. All of a sudden the program refuses to open my projects. The failure message says "unexpected error" - well, never heard of an expected error, but to me it's really ridiculous that the program is asking me whether I wanna open a new project or continue with the existing one. By the way, none of these options make a difference in the malfunction progress. To me it's absolutely annoying as I only would have had to render the project and everything would have turned out fine. But now? No idea what to do next. I've already tried to repair Studio 14 - didn't work. I've even uninstalled it and installed again - also didn't work. Now I'll have to visit a friend who's got the same program and hopefully my files will open with his version. Otherwise I'd have to insert my textes all over again - a two days work!! - You sure can imagine that I want to avoid this senseless "baby-one-more-time-work". But okay, there are worse things in life, though in this very moment the non-opening of my files seems to me like one of the worst things that are happening in my life.
Oh yes, forgot to say. I was working on my German course, Lesson 2. So, due to the electronic desaster, I was only able to upload the Spanish version, which you'll find on youtube:

Wish me luck, because I've got to solve this problem!!!
Posted by Sonja at 5:35 AM No comments: 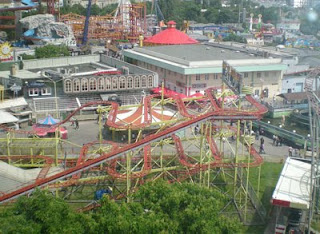 Well, I know, it's been a couple of days since I last blogged something. As you'll probably know, I'm working on this German course (in four different languages!). It's not as easy as I thought it would be, but it's fun getting lost in translations. In the trailer to my second lesson I wanna feature the Vienna Prater and so I just came back from there. As in this new part, I'll be talking about the Giant Ferris Wheel and the fantastic view over Vienna, I couldn't help but getting in one of those big red wagons. Maybe I didn't mention it, but I suffer from a severe kind of aerophobia, so to me it was quiet an experience - not a good one. I only dared to "wheel around" because I wanted these damn video recordings. Otherwise I never would have done it. However, you'll soon see the second part of my German course, including this short sequence showing this "wonderful" view of the Prater area.
Posted by Sonja at 12:43 PM No comments: 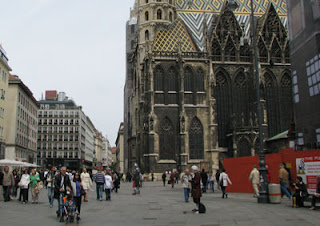 Now I've uploaded my russian version of "German with Sonja". Maybe a bit daring, as my russian is not really that good, in fact, I'm still on a beginner's level. Anyway, it's been fun doing it and I hope some people in Russia will enjoy it and benefit from learning German. So, here's the link:
http://www.youtube.com/watch?v=VUpnWb4Yx-0
I'm already working on Lesson 2 (English, French, Spanish, Russian) and I'm planning a little report on the Wiener Prater. So, it may take some time until it goes online. Unfortunately, my video software is still not working the way it should, but I got a new version of Pinnacle Studio, which I'm about to install right now. Hope, things will get better as it's not easy to insert text displays without hearing any sound. So, wish me luck!
Posted by Sonja at 4:05 AM No comments: 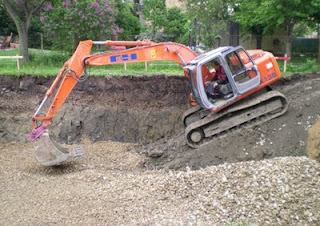 Today the construction team was working on the foundation. Everything went fine until the moment when - due to the rainy weather - a piece of the earth wall broke away. So, it seems that some planned things need to be postponed. Anyway, to me it's been a very interesting experience. What a pity that I'll have to work next week, so I'll miss a lot of exciting things that sure will happen in the construction zone.

By the way, I've just finished my french version of my "German Lessons". You can watch it on youtube:

http://www.youtube.com/watch?v=ILM8jjGYNFs
Posted by Sonja at 1:02 PM No comments:

The beginning of the construction works 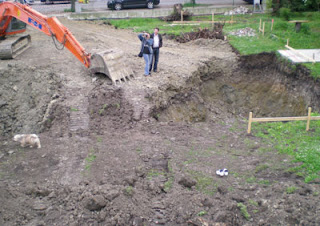 A deep hole in the ground is the obvious sign that the construction works have finally begun and now there's no way back. It's still hard to imagine that this is the place where the future house will be standing. Only time will tell. These two tiny persons on the ground are my brother and his wife, the proud home builders. If you take a closer look you will also see our family dog Mimi (left side of the picture) and if you're focusing on the right side, you may spot my white tennis shoes, which I took off before I climbed this huge mound of earth (about 4 or 5 meters high). The rest of me is on top of it, enjoying the "marvellous" view and wondering how things will be going on. 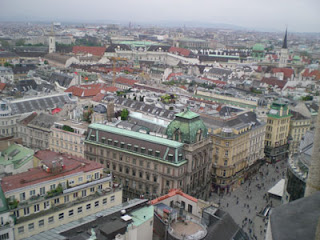 Did it! - I just put my first german lesson online. So you can watch it right away. As I've probably told you before it is not only a language course, but also a little documentation about Vienna. In this first edition I'm talking about St. Stephan's Cathedral. To take a picture like this (on the right) I had to climb up 343 stairs to the so called Türmerstube, situated in the South Tower of the cathedral. So, here is the link for the English version:
http://www.youtube.com/watch?v=ApuCdQgTYCA

And if you are interested in the Spanish version, you simply need to click onto this link:
http://www.youtube.com/watch?v=g-aU-q-jzn0

The only thing missing is the French version, which I'm about to do within the next few days. Maybe I'll also add a Russian version - not before the year 2020 ;) - still need to improve my knowledges of this fascinating but tricky language.
Posted by Sonja at 3:51 AM No comments:

Working on a German-Course for foreigners 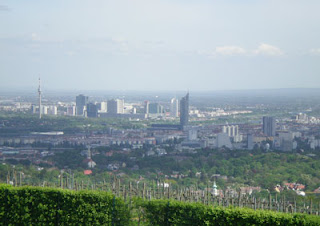 Hi, everybody! Sorry, it's been a couple of days since a last wrote something, but it's just that nothing really important has happend. Today I've been on the Cobenzl, from where you've got a fantastic view over Vienna. You know, what I have in mind is creating an Online-German course for Spanish and/or English speaking people. But in addition to that I wanna film some places of interest and do a little documentation on St. Stephans Cathedral, Karlsplatz, the Vienna Prater, a.s.o. The bad thing about it is, that I've got some technical problems with my laptop and Adobe Elements, resp. Pinnacle Studio 11. Well, though I've solved some of these annoying problems, I still need a little time to finish it and put in online. Once, I've done it, I'll tell you and link it to my website. However, it's not as easy as I thought it would be, as I've got to meet my own expectations concerning quality and the way of making it.

The Vienna Prater on May Day 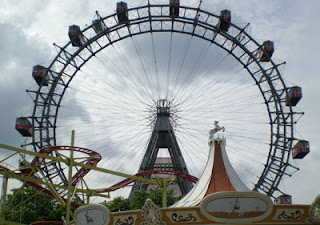 Hi, everybody! Today I've been in the Vienna Prater, which is our most famous amusement park. Due to the celebrations of the 1st of May, there where thousands of people strolling around. I took some pictures and made a little video that you can watch on youtube. I've added the link at the end of this post. Well, though I know that Vienna is really a multi-cultural city, I was surprised anyway to see so many different people from all parts of the world. Of course, there were a lot of tourists too, but most of the visitors are inhabitants of Vienna. I originally intended to film some of the Prater attractions, but in the end it turned out to be a video on human beings, on a variety of faces, languages and smiles. Only for those who may not know it, on May Day we are celebrating the social and economic achievements of the labor movement. There are also a lot of organized street demonstrations going on.

So, if you wanna watch my video, here it is:
http://www.youtube.com/watch?v=b630AimjcKs
Posted by Sonja at 9:48 AM No comments: