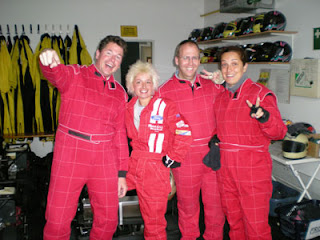 I just came back from a little go-kart race in Teesdorf, Lower Austria. Though we were only four pilots (Horsti, me, Norbert and Alexandra), we've really enjoyed the speed. What I didn't enjoy so much was the bad weather - cold, windy, light rain. We had fun, anyway. Especially me! I drove a very passionate race with full energy, but somehow the car didn't do what I wanted it to do. In it's former life my car must have been a lawn mower, rather than a racing go-kart. It's been about three times that I involuntarily slipped off the track, two times I rattled across the meadow and in the last round I nearly bumped into a crash barrier. Still I must say that my lap times weren't that bad. My fastest lap lay by 34.654 seconds. Horsti's and Norbert's top speed were about 34.34 seconds and even Alex made it to 35.344 seconds in her very first kart-race. What I've learned from this experience is: Little less passion, more brains!
Posted by Sonja at 11:15 AM No comments: 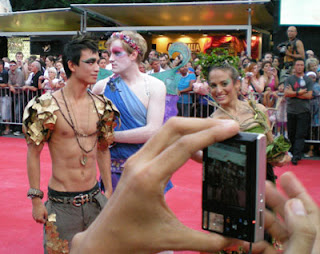 As I don't wanna let you wait any longer, here is the video short cut from the red carpet (before the thunderstorm).
Just finished post-production and in case you wonder, who's singing the song "Coole Schwule", well - it's me.

Enjoy the costumes!!! They are really great!!!
Posted by Sonja at 1:14 PM No comments:

Life Ball 2010 blown away by thunderstorm 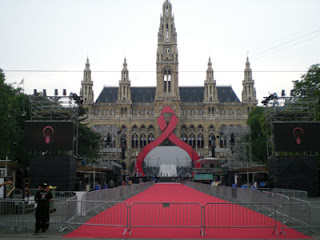 Everything started so well, preparation, decoration, organisation and then ...
Well, let's start from the beginning. Yesterday I wanted to film some impressions of the famous Life Ball that takes place every year on Rathausplatz in Vienna. (My next German Lesson will contain a short feature on the Rathaus). I was quiet happy that I've found a good position right beside the official camera teams from all over the world. So I was able to capture some fantastic scenes on the red carpet (costumes, stars, a.s.o., which you'll hopefully see in my next language video).
Due to the thunderstorm warning, the organizers had decided to start the opening ceremony one hour earlier, but in vain. Nature said "no" after about one hour of broadcasting this major event and sent millions of raindrops from heaven. By the way, we really needed the rain after about three consecutive weeks of a tropical heatwave, only the moment wasn't that brilliant. Two hours later and everything would have turned out fine for the Life Ball, but there's nothing that one can do against nature. So, maybe the event will have better luck next year!
Posted by Sonja at 3:34 AM No comments: 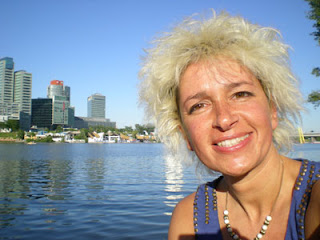 Hi, everybody! It's not that I'm lazy, but I've simply had no time to blog something, at least, nothing of interest. Besides, right now I'm pretty busy in the office at Kleine Zeitung as my collegue is on vacation, so there's not really much to say. But now I've just finished my 5th German Lesson and I proudly present you the following links:

So, hope you enjoy it.

I've got to update the website of my sister-in-law, Alexandra Reinprecht, a very talented opera singer. She's got her debut of the operette "Zarewitsch" in Mörbisch. So, there's always something to do for me.
Posted by Sonja at 11:23 AM No comments: 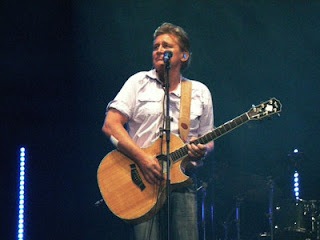 Ready! Just loaded up my "masterpiece", a musical short-cut of the Danube Island Festival that took place last weekend. I'm quiet proud of it as I did it with only one camera and it's been a lot of cutting work on the computer. So, here's the result:

Hope, you'll like it. Now I can concentrate on my next German Lesson, which will also be about the Danube Island and the Festival. As I'll have to "shrink" the musical short cuts in favour to my German Lesson, I wanted to give you the possibility to watch the full video that I've produced, anyway!
Posted by Sonja at 11:08 AM No comments: